The Real Treasures of Levi’s 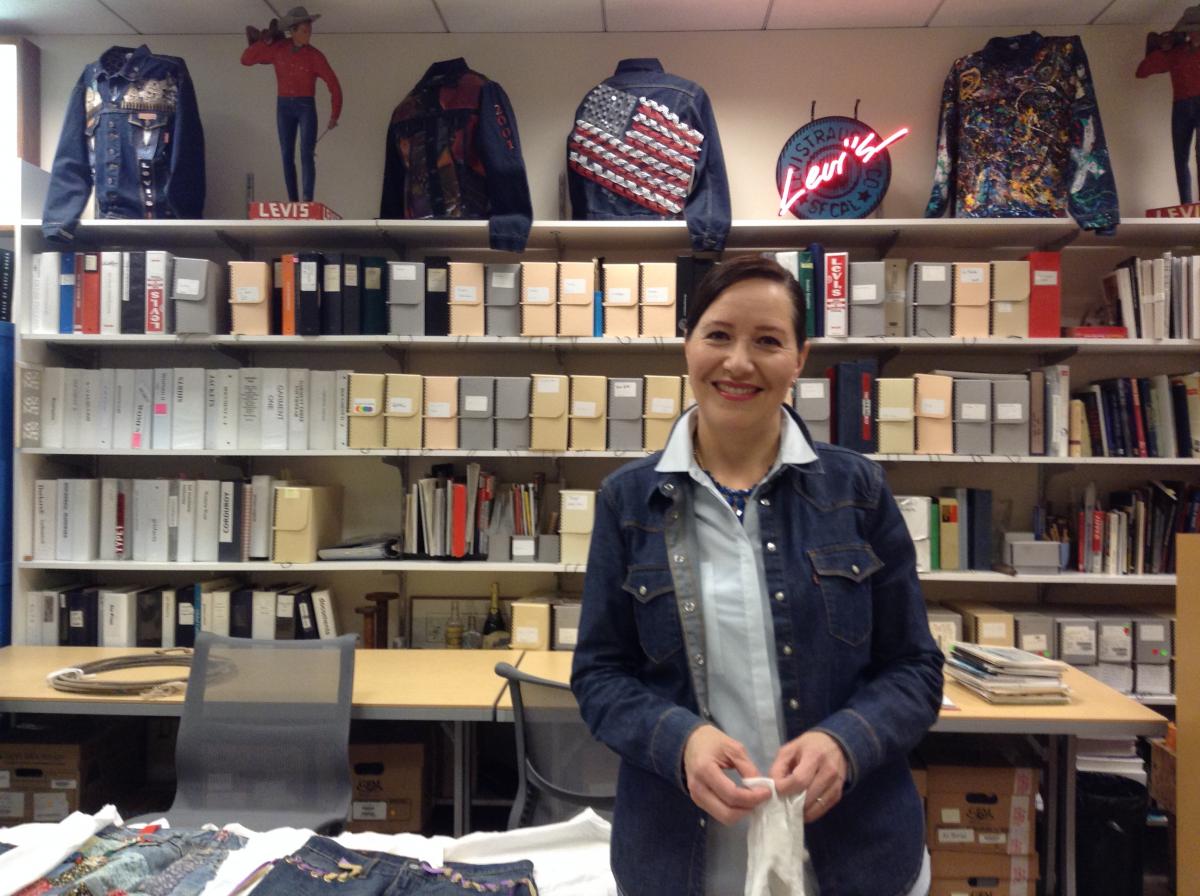 Historian Tracey Panek, in 'her' Levi's archives in San Francisco

Exactly one year ago, I was fortunate to visit the headquarters of Levi’s in San Francisco. In fact, anyone can visit the museum inside the HQ, featuring some vintage pieces and some videos, but I was lucky enough to enter the real Fort Knox: the archives. 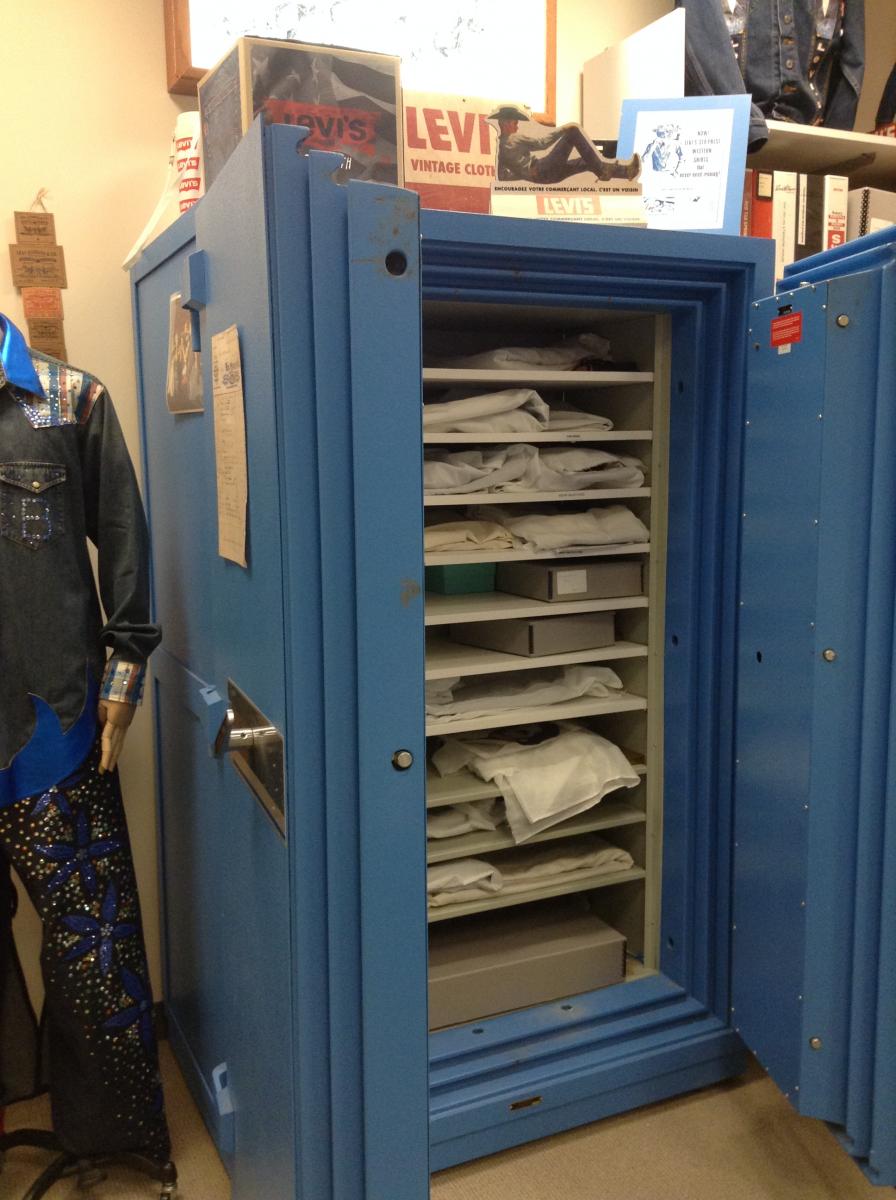 To tell you the thruth, I was very emotional, when the archivist historian Tracey Panek, opened the vault, and took out the oldest pairs of jeans in the world. Ever heard of the Nevada jeans? Or the Prison Pants? Well, they both sit in the best-kept fireproof safe-deposit in the world. 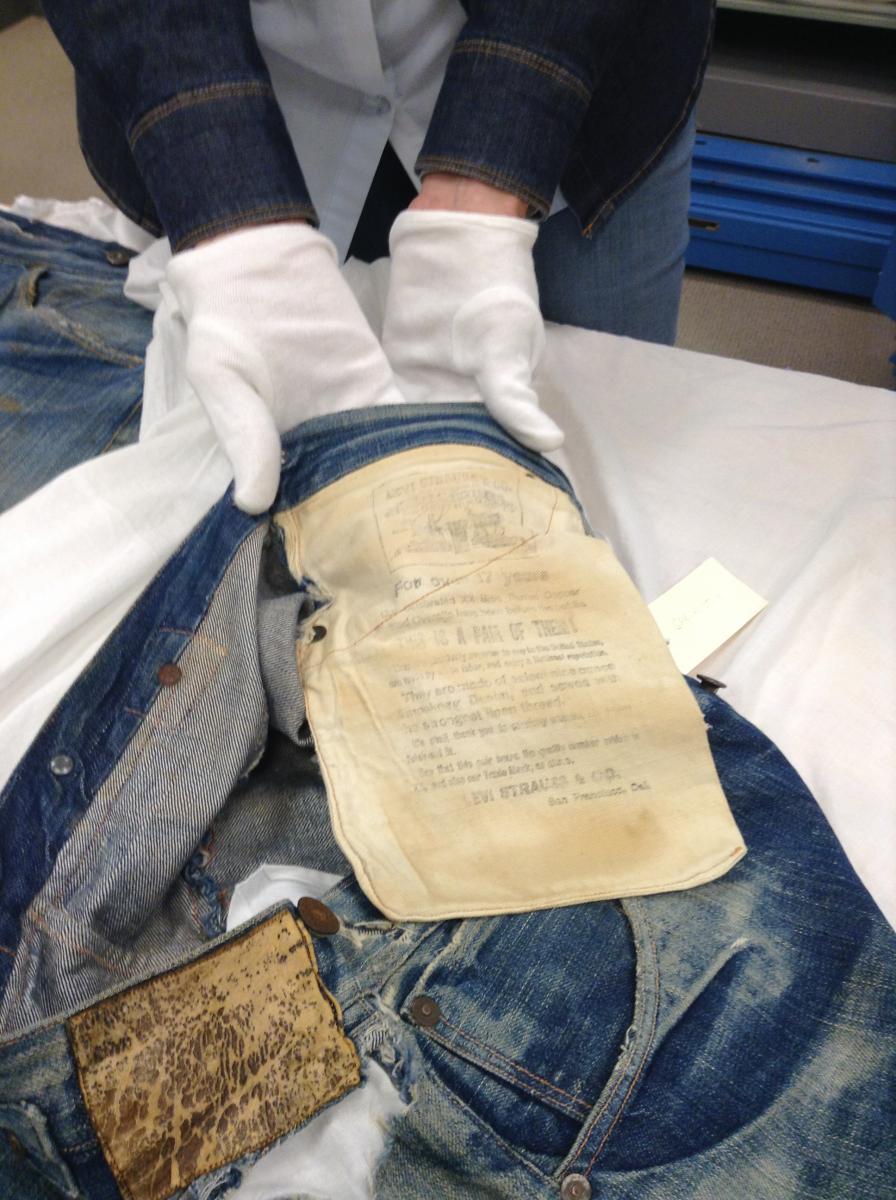 But first, a word on Levi Strauss. Levi was born in Buttenheim, in Bavaria in 1829, as the youngest son of a Jewish family. His father was a traveling peddler. At the age of 18, Levi moved to the United States, where his two older brothers already lived and worked as dry goods salesmen. Gold had just been discovered in the West and the world rushed in, turning a sleepy San Francisco into a bustling town. Remember the shout: ‘There’s gold in them there hills’. Levi just turned 24, when he launched his business, not in New York, but in San Francisco. He sold all kinds of gear, from blankets and underwear to farming goods; his customers being miners, people working on the railroads or farmers. By 1870, the railroad from East to West was finished, and all materials that came from Europe with clipper ships were easily transported to California, thus also bringing goods to Levi’s business. At first, the material he used was tent canvas. But then there’s this one customer, who asks for a pair of pants… The start of a new adventure for Mr. Strauss. 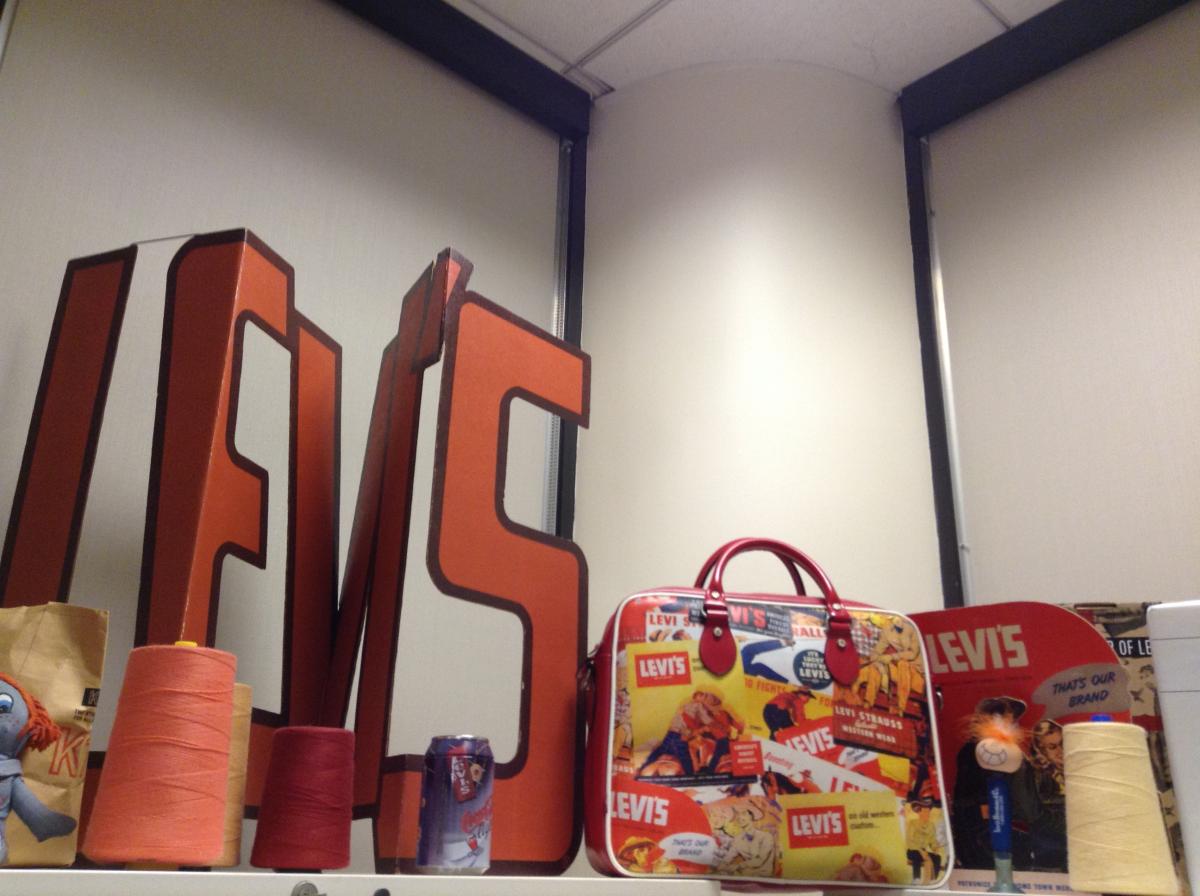 The first blue jeans dates from 1873. In fact, the jeans is attributed to Jacob Davis, an immigrant from Latvia, living somewhere in the Sierra Nevada and working as a tailor. Levi Strauss is his fabric supplier. Davis doesn’t want to do business on his own and asks Levi to deposit the patent for the blue jeans, using the same pockets, using the same rivets to hold the fabric together. For quite some time, Strauss and David run the business together – Davis being the factory’s chef. The jeans at the time are called ‘waist overalls’, and are pulled high up to the waist. As there are no mills in the San Francisco area at the time, the fabric used for these first jeans comes from a mill in New Hampshire, called Amoskeag. 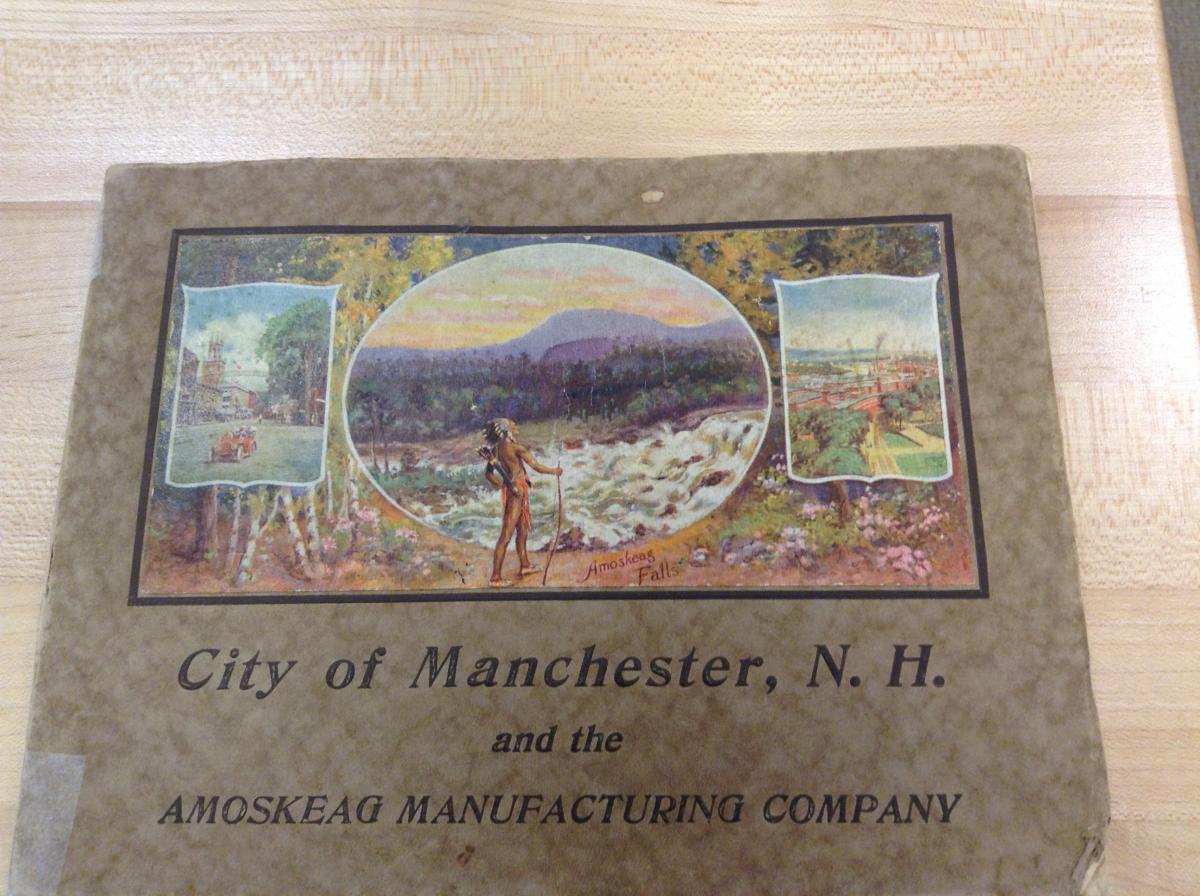 But back to the archives, where the archivist now takes out the eldest blue jeans in the world, dated around 1879 – of course not touching it with her own hands, but having put on white gloves (as if she’s holding the most expensive treasure from Liz Taylor’s jewellery cabinet). There’s loads of anecdotes coming with the jeans and shirts she pulls out, one after the other. Do I know that the second pocket was added in 1901? No, I don’t. Do I know about the first jeans for women, dating back to 1934? Again, no. And of course I have no clue when she talks about the spurbites (from 1890) or the beltloops (from 1929). 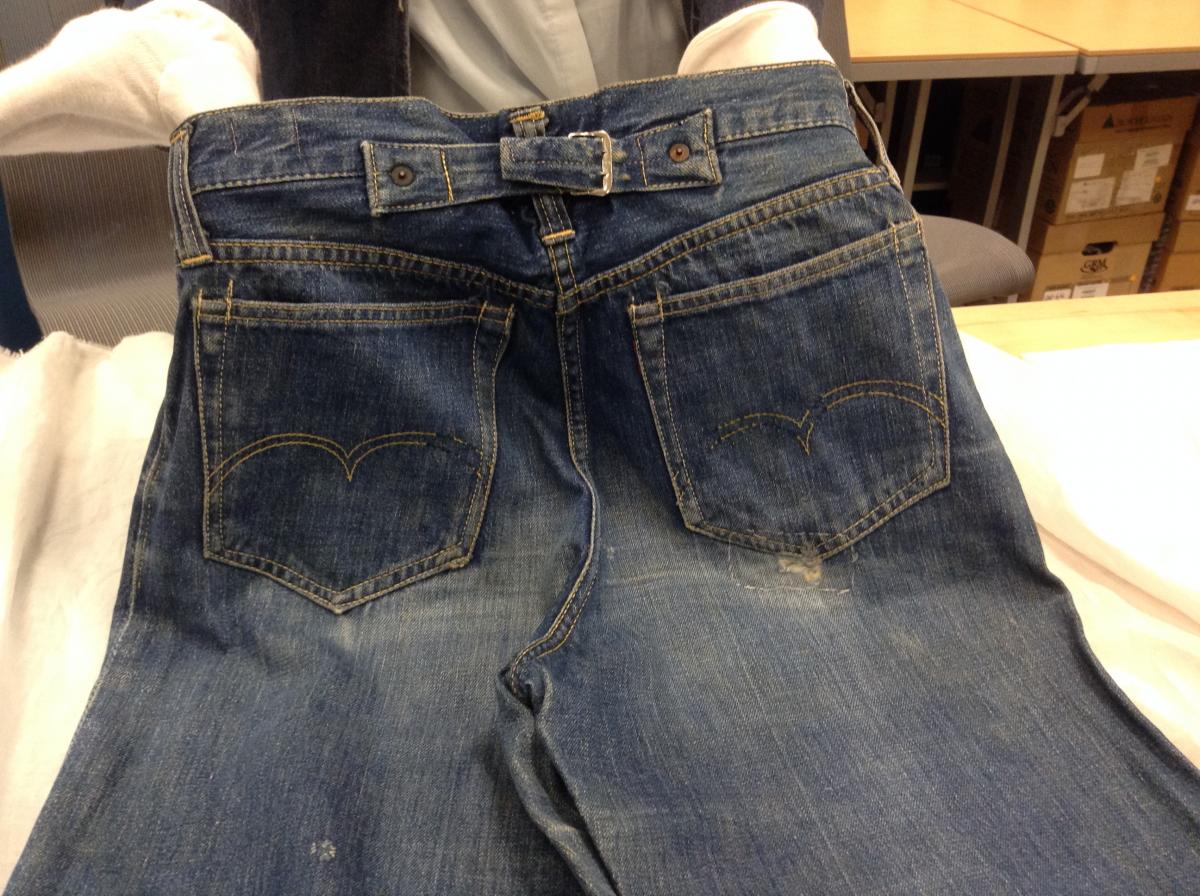 The archives are a pleasure dome for denim lovers. And even though a lot of documents went missing due to the many San Francisco earthquakes, what makes the archives so amazing, are the pieces inside and the many stories and anecdotes that come with them. Of course some of the jeans were patched and reworked, all of them being true originals, some of them even with a name tag on, like the Harriet Atwood one, dating back to the 1930s, or the one found in a coalmine in Colorado. Some of the pieces have been donated to the archives, some are bought by Levi’s, for obvious reasons. Again, I was often moved to tears, because I almost felt the true heart of denim in this room. Just loved it! 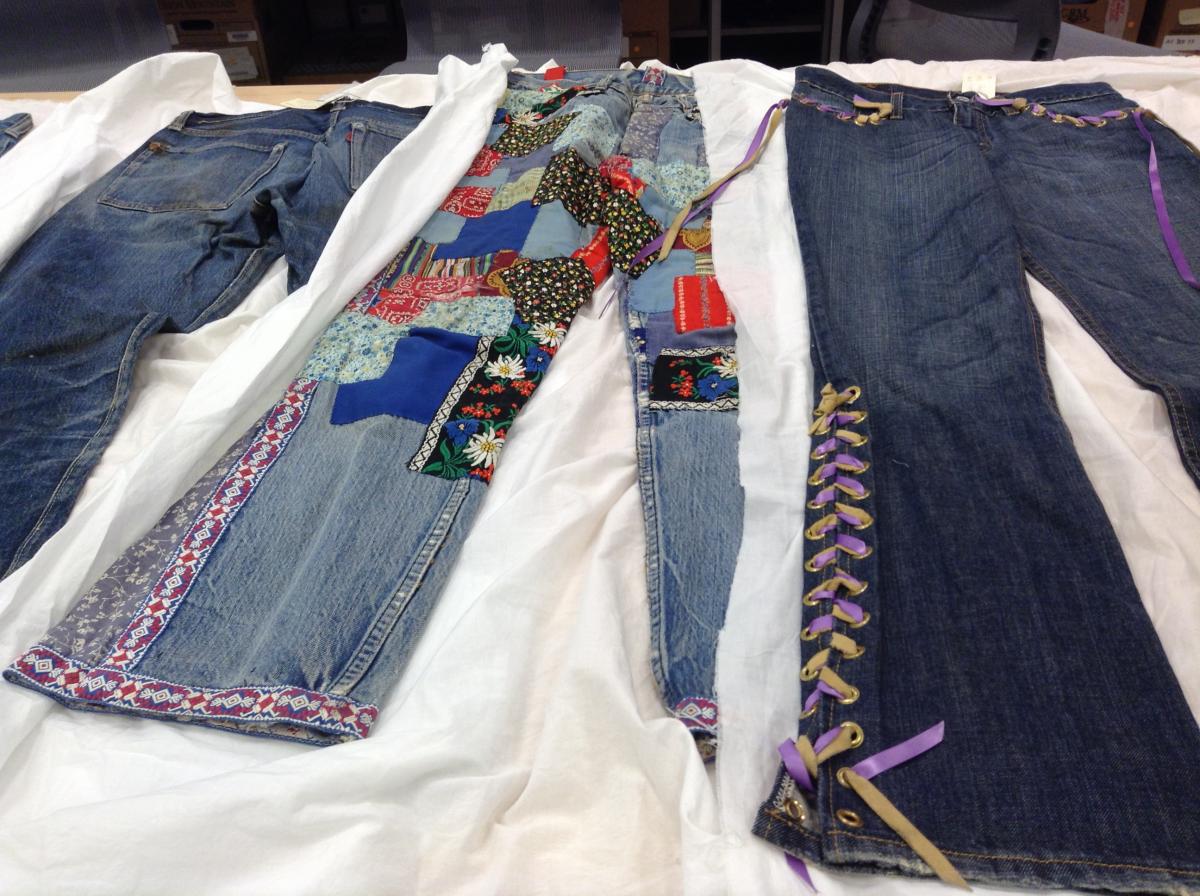 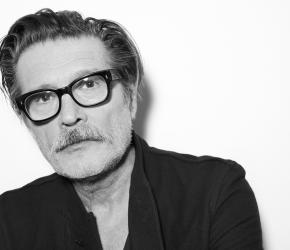