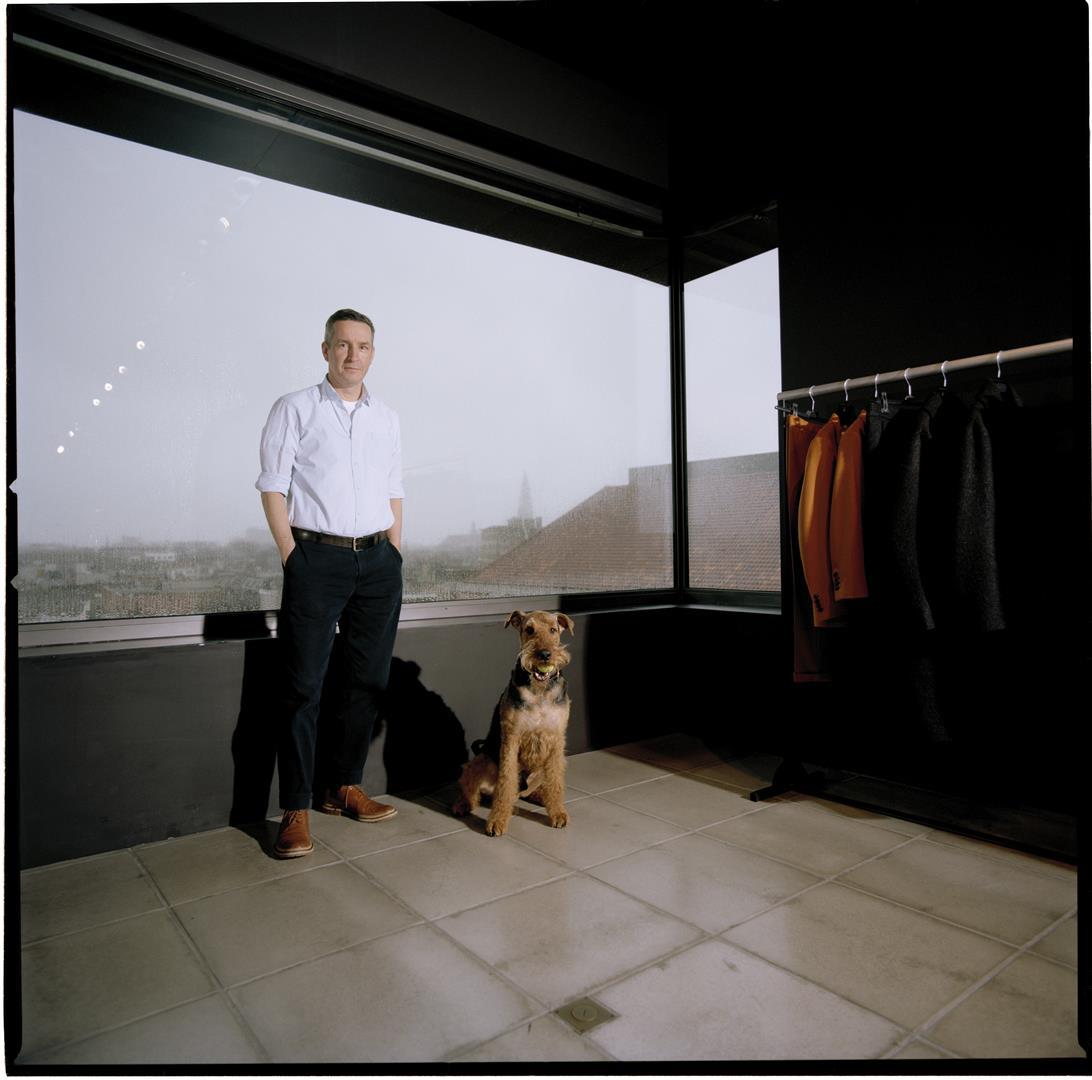 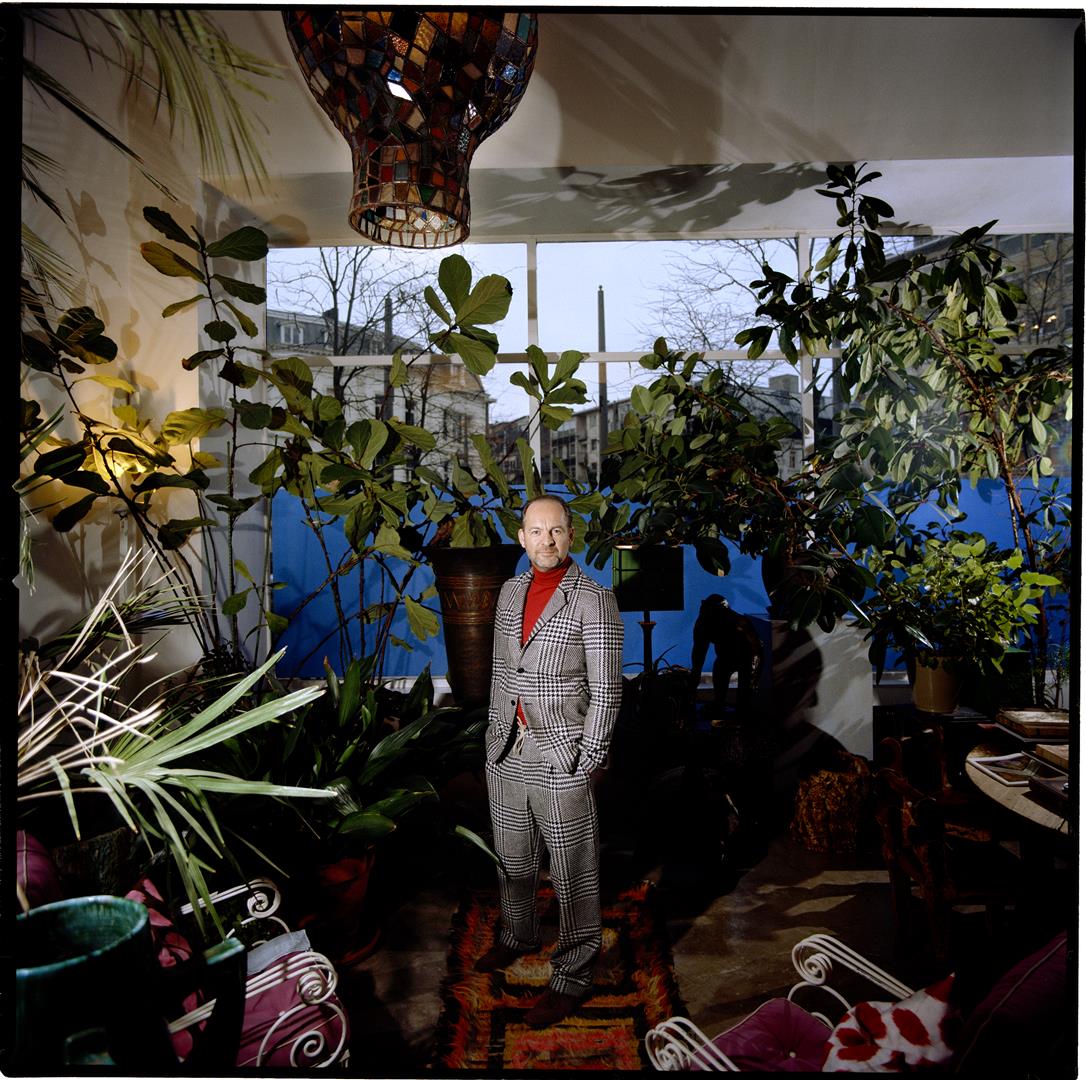 Gert Voorjans made the AD Collector list of best interior designers a few years ago. He also finalized a tome on his work, called Interior Life, probably one of the most beautiful books ever made. But what to say about this designer/curator/artist/dreamer? His family is into furniture since 1790, but it’s to Voorjans’ credit that he moved on to something much more encompassing: his style is of the eclectic kind, mixing periods and styles into very specific moods, personalizing based on his clients’ tastes, but always mixing that with his own. “Everyone is always playing it safe”, he says, sitting in his jungle-style salon in Antwerp, “I believe that you can’t show character trying to be nice to everybody. Show your gut!” As an interior architect Voorjans was trained at Axel Vervoordt, starting up his own business in 1997. He’s famous for his collaborations with Dries Van Noten (for the Paris and Tokyo flagshipstores) and Joyce Ma (in Hong Kong), but also designed for the likes of Nina Garcia and Mick Jagger (“no comment”).  His current projects range from a Chateau in Burgundy to a Deauville-style villa on the outskirts of Brussels. “It’s never a formula”, he admits. “Authenticity is all I care for. I’m not interested in finding this one chair and having it copied fifty times, no, tomorrow I’ll probably come eye to eye with something far more intriguing.” 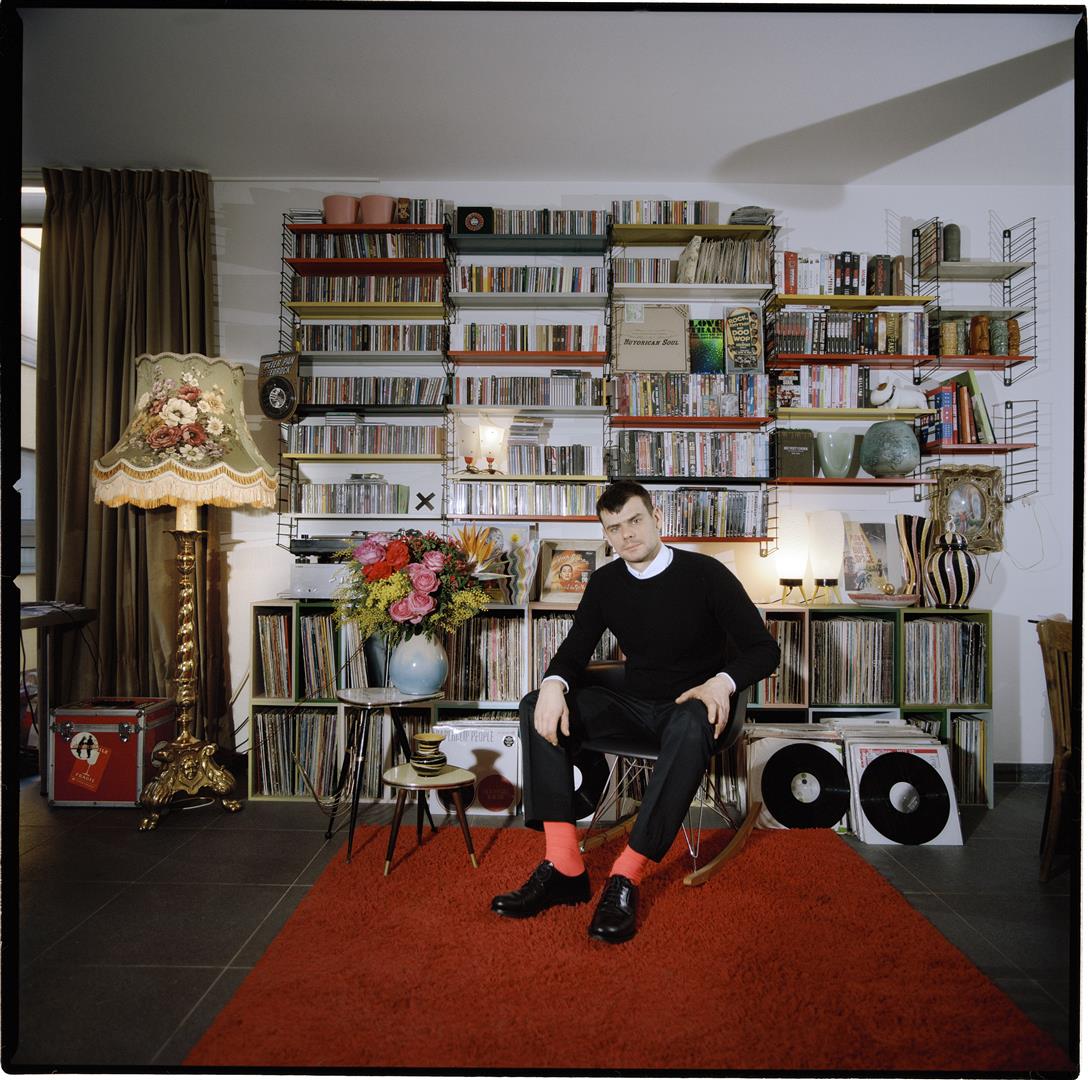 Mark Colle was photographed at home by Marleen Daniels

“Life hasn’t changed all that much”, says Mark Colle, standing behind the counter in his flowershop Baltimore Flowers. Still, he agrees most of his colleagues don’t get featured in i-D or on Dazed Digital, let alone are asked to make flower arrangements for highly anticipated fashion shows like Jil Sander or Dior Haute Couture. “I first met Raf Simons when he came into my flower shop looking for plants for his home. I didn’t know him and knew nothing about fashion. Then later on, he popped the question.” First, Colle made pink and yellow bouquets that were put in plexi boxes on the catwalk of the last Jil Sander show featuring Simons as creative director. Then came Simon’s first Dior couture show, a few years ago, where Colle made the walls of a ‘maison particulier’ in Paris stand out with thousands of orchids, roses, delphinia and dahlia  - the smell of the flowers made for an exquisite welcome to an perplexed audience. Colle, a highschool drop-out, has been in the flower business for 19 years and came to love “the growing, blooming and fading” of flowers – three steps one could easily compare to fashion. “Doing the Dior couture show was nerve wrecking: I worked 52 hours on the décor, together with 40 people. And I must say: an orchid normally doesn’t smell. Until you put 40.000 pieces together in one room...” Colle is up for more of these arty jobs in the future, but stands feet firmly on the ground. “The day after the Dior show, a woman came into the store asking for a 12 euro bouquet. What could I do but make the best of it.” 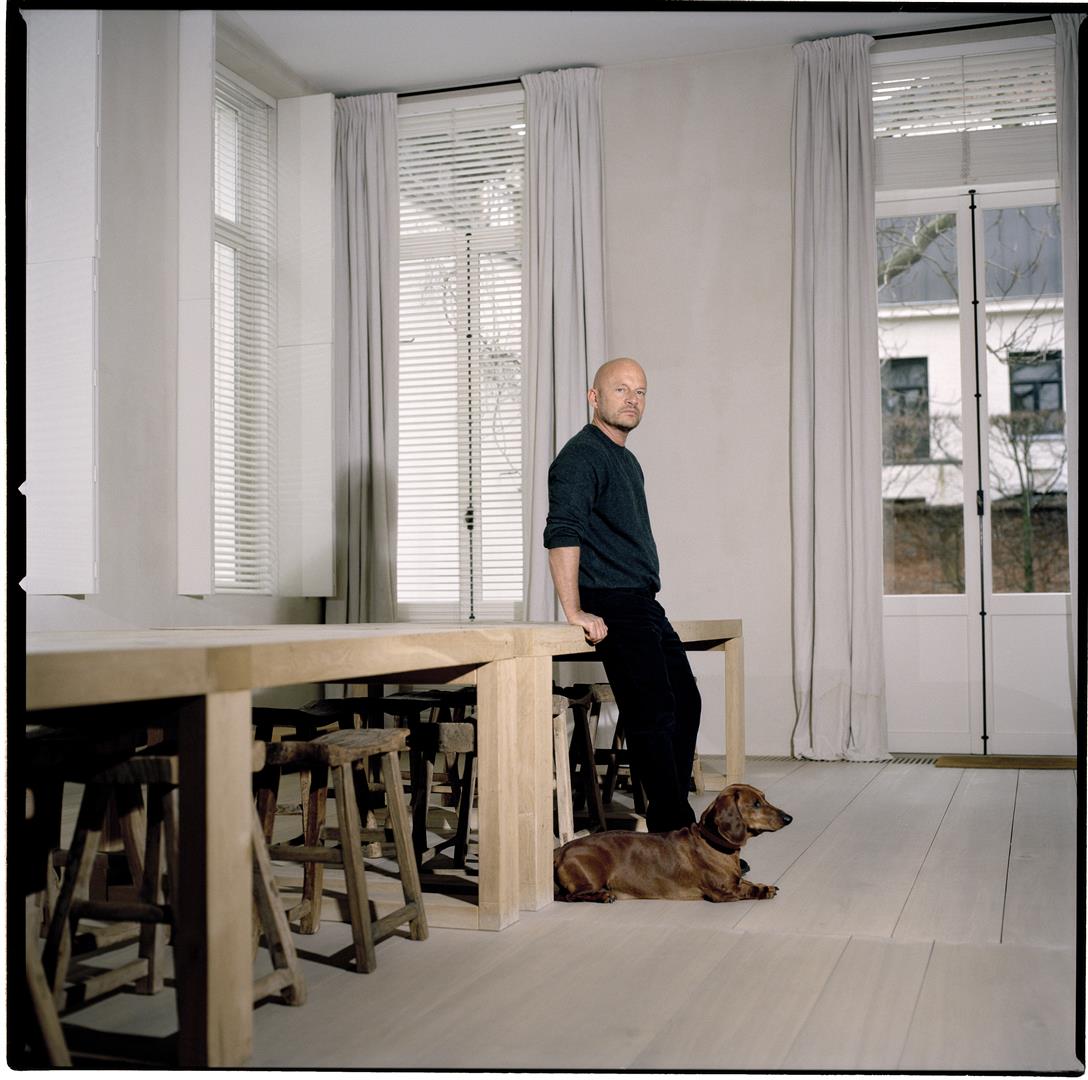 Vincent Van Duysen was photographed in his home by Marleen Daniels

It took one year to plan and two years to get the work done. Vincent Van Duysen has been living in this neo-classical, former notary’s office for more than ten years now and enjoys the peace and quiet of the place (if his two dogs Gaston and Loulou feel like it). Located in the heart of Antwerp, the look and feel of his own house stands for his design philosophy. Think space and light and just the right balance between rough and not all too sophisticated – plain minimal wouldn’t do him justice. Having graduated as an architect in 1985, Van Duysen worked in Milan for Cinzia Ruggeri and Aldo Cibic-Sottsass Associati before venturing out on his own in 1990. Ever since, he’s balanced his career between architecture and design – creating furniture for Geiger (Herman Miller), B&B Italia, Pastou, Bulo and Swarovski but as easily skipping to architectural projects for Selfridges (London and Manchester) or other retailers. Lately, he’s frequently travelling to New York (where he just finished an office project and a private penthouse) and Beirut (an office and private project as well).  “I also love working with private clients on tailormade residences wherever in the world”, he admits. “It’s a lot of work, taking in all the details, but it’s utterly rewarding.” Two monographies were published on Van Duysen’s work: one by GG Editorial (in 2001) and one by Thames & Hudson (in 2011).  The essence of his signature in his own words? “Finding the right balance in a specific space, working with both architecture and interior all the same and adding craftsmanship whenever possible”, Van Duysen states. “It can never be about the sort of architecture that’s only meant for the magazines. You have to be able to live in the spaces I create.” 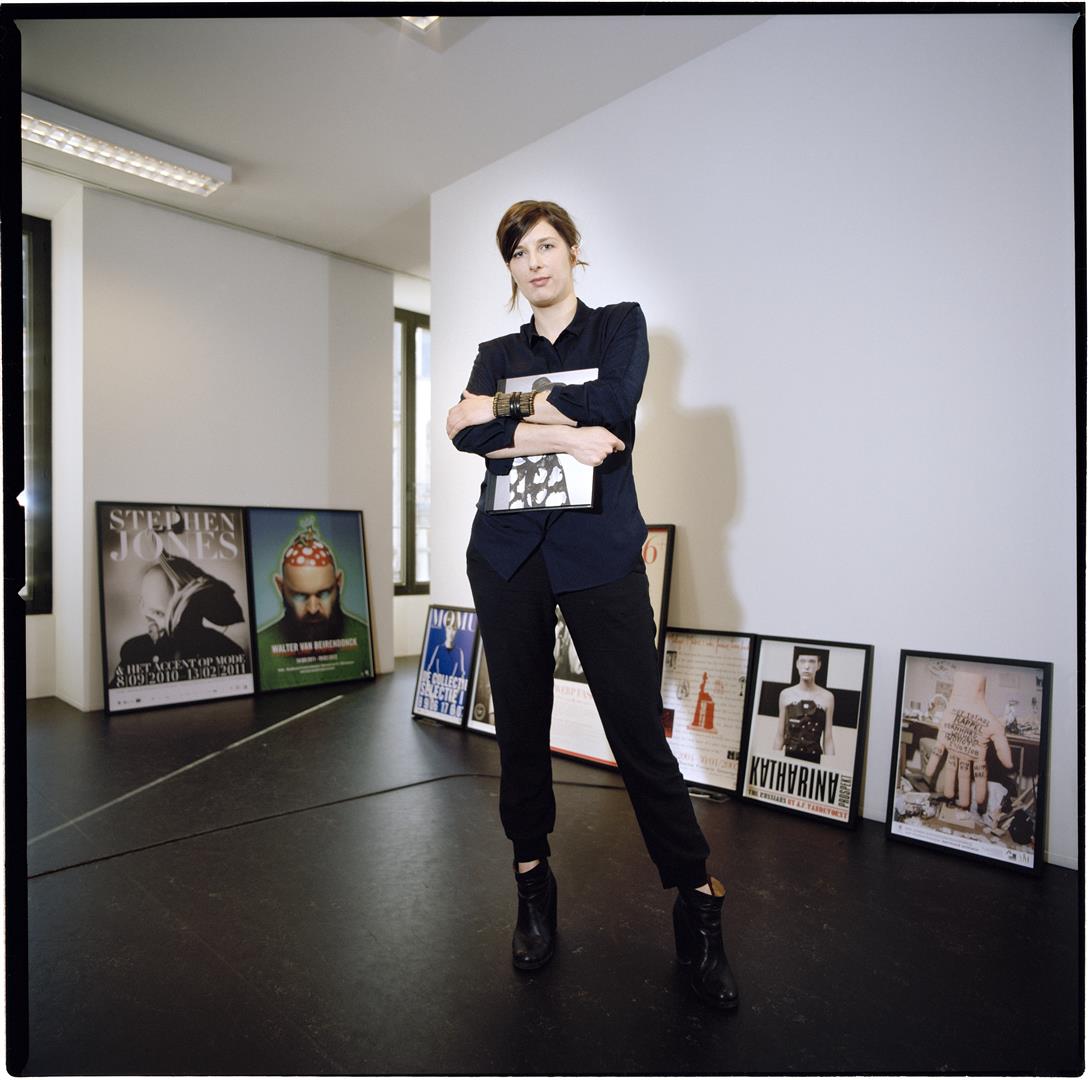 Kaat Debo was photographed in her office by Marleen Daniels

“Fashion is more than a series of clothes”, says Kaat Debo, the museum director of the Antwerp ModeMuseum. “It’s one of the many results of a creative process of a designer. Not everybody in the museum business thinks like this, but I do. The whole concept around the clothes can answer many questions.” Debo is sitting at her desk in the ModeNatie (just a floor down from the fashion department of the Antwerp Academy) and is working on yet another exhibition (while the current one, Footnotes, is still going strong).  Debo started out as a program director and co-curator under Linda Loppa, but eventually took the post of director herself adding shows on the colour black, the Belgian ‘maroquinier de luxe’ Delvaux, Walter Van Beirendonck and Madame Grès (to name just a few) to her curriculum.  Debo, who was researching the career of choreographer William Forsyte for a PhD. and teaching about the likes of Isadora Duncan before venturing into the fashion world, loves to work with the creative fashion folk. And she’s happy with the way fashion in a museum context is seen. ”It’s been a long fight to be taken seriously, even among other museums.” 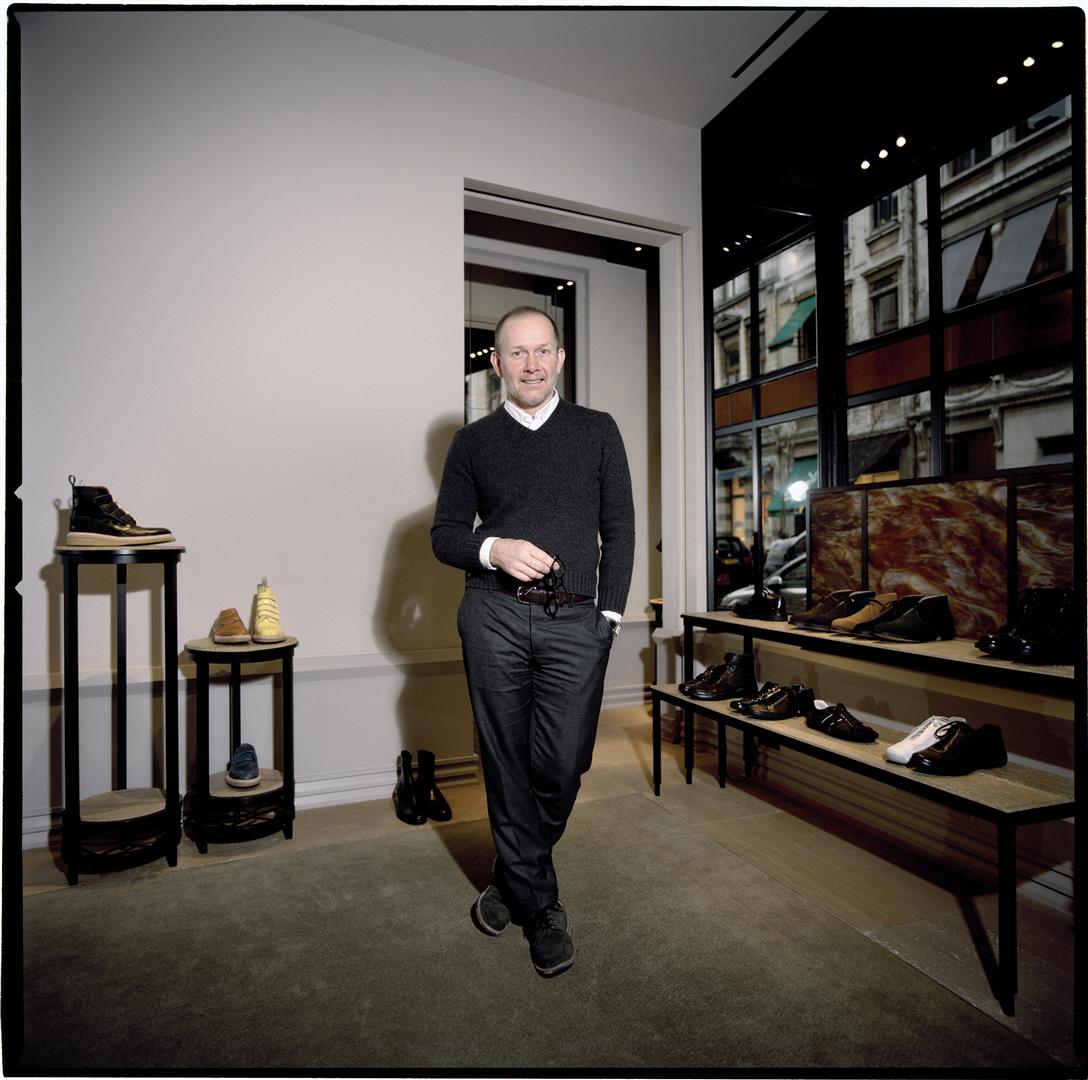 Eddy Michiels was photographed in Antwerp by Marleen Daniels

“I have been in this business more than thirty years and I’m still learning every day”, says Eddy Michiels, while taking a seat in his men’s store across from his first shop. “With e-commerce, there’s a whole new world opening up. We’re not just selling to Belgian clients but to Hong Kong and Japan, to America and Australia. I go to sleep and I keep on selling”, he laughs. Michiels and his partner Geert Bruloot (who was also the founder of  Louis, the first shop in the world to believe in the creative force of the Antwerp Six) take the shoe business at heart, never forgetting their core interest: creativity. They were the ones to introduce Dries Van Noten, Martin Margiela and A.F.Vandevorst footwear to Antwerp in the middle of the eighties, surrounding the Belgian designers later on with the likes of Prada, Yves Saint Laurent, and talented footwear designers like Nicholas Kirkwood, Tabitha Simmons or Mr.Hare. “We do things around here based on emotion”, says Eddy. “Only afterwards we look at the numbers. That’s why we believe in projects like ‘the creations’ by Ferragamo, reintroducing old designs in limited editions (Coccodrillo is one of five retailers in the world doing this) or why we support young designers who are still studying at the academy.” Eddy and Geert are the curating couple behind Footnotes, the exhibition on creative shoes that is now running at the MoMu in Antwerp – featuring a lot of strong pieces from their own collection. 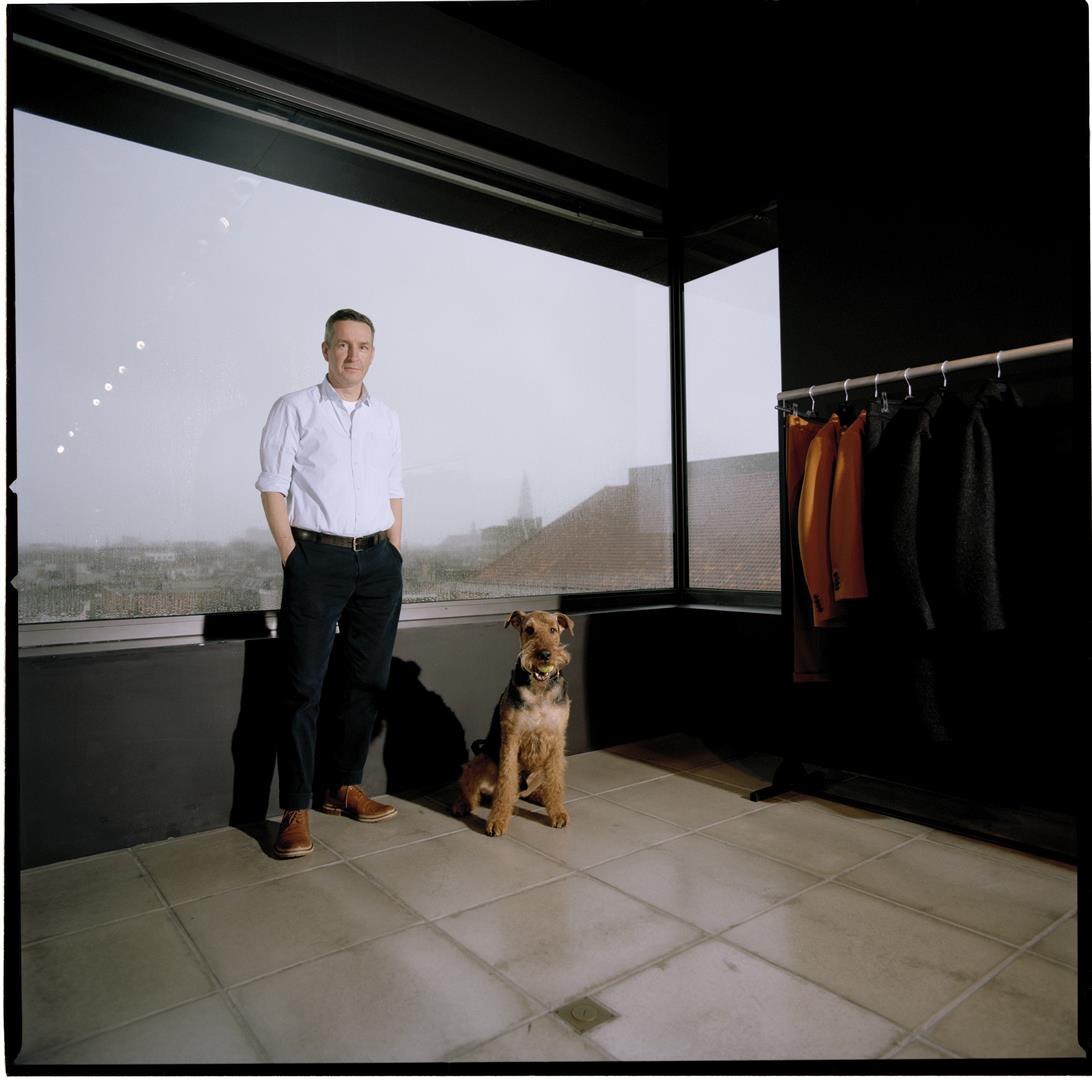 There’s a discretion to Dries Van Noten that is completely understandable. The Antwerp-based fashion designer has been working like crazy since he started his eponymous line in the mid-Eighties. More than sixty collections, four flagshipstores, two exhibitions and two  books later, Van Noten’s star is out there: shining from Hong Kong to Los Angeles, where even the likes of Emma Stone, Maggie Gyllenhaal and Nicole Kidman are spotted in his creations.  Van Noten’ s focus on getting the job done is as legendary as his passion for gardening “and sitting on his lawn mower himself” – the best treat after a hard day at the office, so he says. Van Noten is to show us his new womenswear collection in March in Paris and we honestly can't wait. The way Van Noten’s career is going – with prizes here and there and fashion shows following each other at a never ending pace – we would think he has built an enormous team around him in order to delegate more and more. Hell no, that’s not Van Noten’s way of working. The joy of work is in the work itself. Choosing fabrics and creating beauty, on a day to day basis. And in the meantime waiting for the roses to bud. 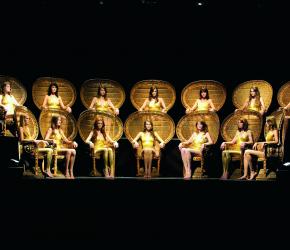 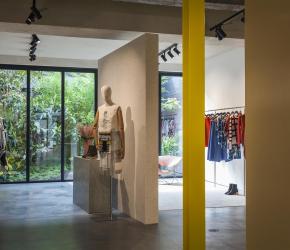 A first flagship for Christian Wijnants